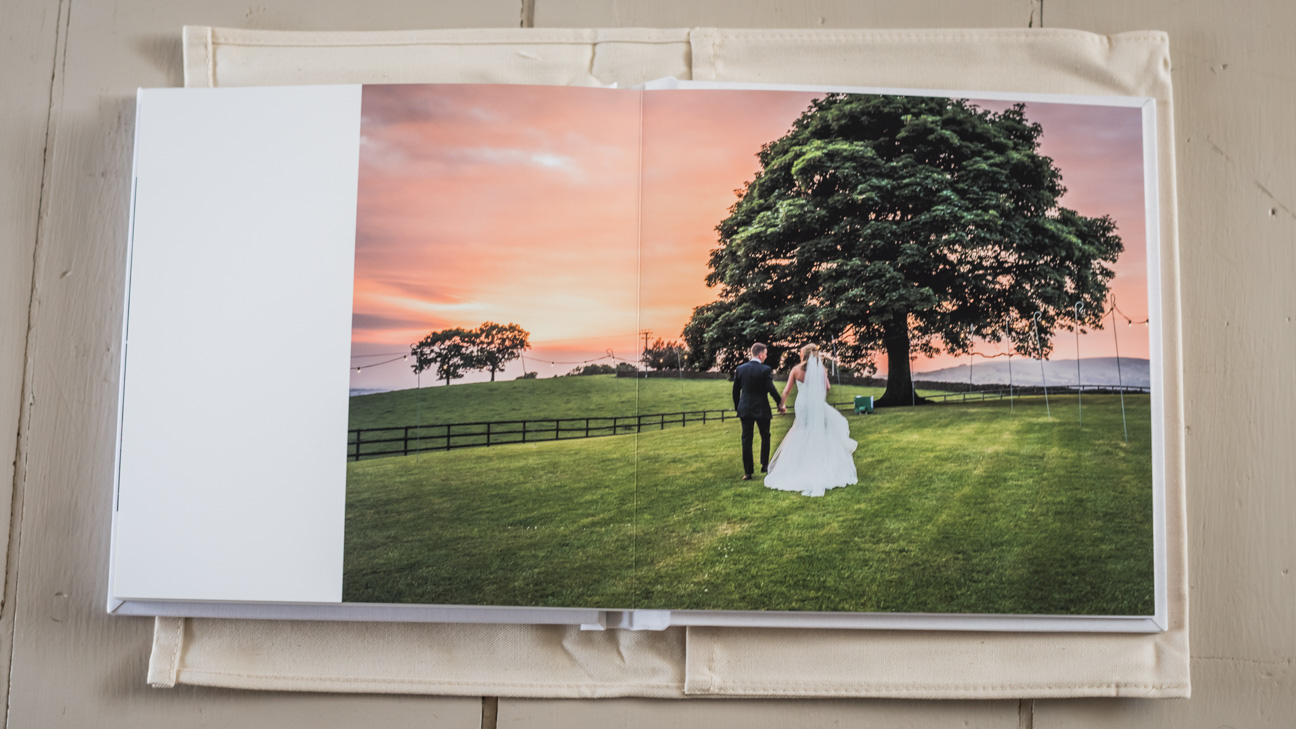 I am well used to hearing comments such as “I can’t believe how rich the colours are”.  You could substitute ‘vibrant’, or ‘bright’ also.  A lot of people comment on how the photos seem to look almost 3-D too – because of that vibrancy.  If you’re not used to seeing photos actually printed, then it’s a common reaction.  Another common phrase I hear is “it’s like the photos are coming off the page”.

People often talk of seeing little details in the photos that they’d hitherto missed.  A lot say that happens even though they’d already studied the photos many times before.  Maybe it’s the size – a lot of us don’t look at photos on anything larger than a tablet screen these days (or even a phone screen), whereas the smallest album I design is 10 x 10 inches, so the photos inside can be much larger (see the final photos below – the images cross the central spine, so they’re around 15-16 inches long).  Maybe it’s that you look at something differently when you’re holding it in your hand.  You can put your face closer to it, you tend to ‘pore’ over details in a way that you simply don’t when it’s on a screen.  I don’t understand the psychology of that, but it’s true isn’t it?

Above all though, I think it’s that looking at a wedding photo album is more of an event.  You’re not just opening up a folder and clicking through.  Look at the first photo below.  You have to lift the lid of a box to begin the process.  And it’s quite a smart box – you know that there’s something good inside.  It’s reminiscent of opening a birthday present isn’t it?  So you’re filled with expectation and a little wonder to start with.  That carries on as you lift the lid.  Because the book isn’t immediately visible.  Folio albums (like in the photos below) come in a cloth bag.  Partly it’s supplied to protect the cover of the album, but partly because it all adds to the sense of expectation, and excitement, and ‘specialness’.  Just like unwrapping a present.  These few steps all add to the build-up …… as does seeing the cover.  Whether it’s a fabric, like below, or a sumptuous leather, you can tell that you’re holding something special in your hands.  Care and attention has gone into creating this object.

And then … finally … you turn the page and begin the journey through the wedding day, led by the photos and the layouts, which have been designed to take you through the day, and draw attention to the key moments and people that made the day special.

So there you have it.  That’s what makes a wedding album so special.

If you’ve a USB of wedding photos sitting in a drawer somewhere and would like to discuss the options of having your own wedding album created, it’s as simple as dropping me a line or giving me a call.  I’m always happy to talk, offer thoughts and give an ideas of costs for no obligation.

This site uses Akismet to reduce spam. Learn how your comment data is processed.